After an intermittent, albeit fairly satisfying, night of sleep, I got out of bed around 5:30 a.m. to get ready for the race.  Ted was still sleeping, at least he appeared to be.  I went about my morning ablutions as quietly as I could so as not to disturb him, but the likelihood of that happening seemed slim.  If there's one thing I've learned about sharing a hotel room with Ted, having done it three times, that boy can pretty much sleep through anything.  I marveled at his ability to slip into slumber quickly, not to mention staying there.  And I was probably just a little bit jealous.

But only a little.

Eventually, Sleeping Beauty did rise.  We had decided the night before that we'd leave around 6:45 a.m.  That gave us 45 minutes to get to the start, which was only 3/4ths of a mile away from our hotel.  I completely relied on Ted's sense of direction to get us to where we needed to be.  I have a habit of not paying attention to my surroundings, and this happened to be one of those times.  As we walked, Ted remarked that he's never seen me this quiet pre-race before.  I told him that there wasn't really anything to say.  I was minutes away from starting this race.  I wasn't going to ask for reassurance on how I would do or voice concern about the unseasonably high temperatures (it was in the upper 50's at the start, but it was expected to reach the mid to upper 70's during the race which is not optimal for long distance running).  In the past, I would do that, but not this time.  I just didn't think it was a constructive thing to do.

All the work was already done.  And, contrary to what the engineers at the fitness center think, I do NOT control the weather.

We were both in different corrals so, ever being the gentlemen, Ted saw me to mine before he went off to his.  We exchanged hugs and good wishes and then, he went off.  I waded through the crowd, looking for "the perfect place to stand".  Once I realized there really wasn't any, I powered up the Garmin and waited as we all got funneled into our corral, like cattle.  Did I mention that 45,000 people had registered for this marathon??  Since John didn't make the trip with us, let's call it 44,999.  I have never been at a race that big in my LIFE.

May I remind you that I am not a detail person?  If you read my Atlantic City Marathon race report last year, you already knew that.  For the benefit of new readers, if you are expecting a play-by-play of the race, with lengthy, graphic descriptions about the scenery, you may be disappointed.  I just put my head down and run.  I'm not on a sight seeing tour; I'm on a 26.2 mile mission.

Just wanted to...clear that up.

The gun went off about five minutes after the scheduled race start.  I got myself in a pretty good rhythm and told myself that I was going to do my best, whatever that ended up being, and that it would be enough.  I did have a goal time in mind and, having heard how fast and flat Chicago was, I figured this would be the race to shoot towards it.  As the miles went by, it became clear that I wasn't going to meet that goal.  There were lots of people to get around and I didn't want to expend exorbitant amounts of energy weaving around them.  The water stops got jammed up with people walking (when all the blood is in your legs, you tend not to think clearly and forget that you have thousands of people trying like hell not to run into you).  Perhaps I was a tad bit conservative due to the unknown of how the warm temperature would affect me, but hindsight is 20/20.  The good news is, I felt like I COULD have run that time.  I felt very strong and fit this time around.  When I ran Boston in April 2011, I pretty much ran out of steam at the 30K mark.

But, not here.  Not this time.  That was not the issue.

I ran the whole thing, no walk breaks.  And, when Mile 25 came around, I found I finally had some room to run.  So, I poured it on and did the best I could. My GPS showed me crossing the line in 3:50:49, but I probably lost signal a few times due to the abundance of tall buildings.  Here is the link containing my Garmin data:  http://connect.garmin.com/activity/120413434.

After crossing the finish line, I continued to walk.  I received a heat sheet blanket that I took more out of politeness than sincerity (um, hello, it was 75 degrees by then).  The volunteers at the finish line were FANTASTIC.  They all smiled and gave you a hearty, "congratulations!" when they handed over the medal.  It seemed to be totally genuine too, which reinforced my belief that folks in the Midwest are super duper nice.  I got gatorade, water and food.  Happily, the streets in Chicago seemed wide enough to accommodate a large group of finishers at one time, at least when I came through (Boston's finish line mimics it's rush hour traffic:  stop and go, stop and go, stop and go).  I continued to eat and drink while walking.  Once I found out where the fountain was, I went in search of Ted.  Lo and behold, he was exactly where he said he'd be.  We shared our individual marathon experiences with each other.  Neither one of us ran our fastest times that day, but we were okay with that.  Besides, the bling looks the same: 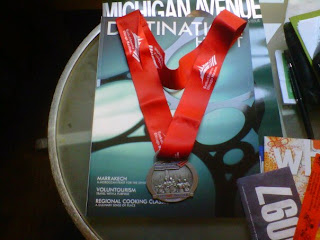 So, what did I learn from this experience?  That you can be satisfied with being dissatisfied.  I didn't get a PR at this race, nor did I match my marathon PR from May 2010.  But, I'm at peace with that.  I am thankful I went into this with a positive mental attitude, a solid training base and, most of all, dear friends like John and Ted that make this journey even more fun, not to mention meaningful.

However, that doesn't mean I don't want more.  My desire to run "that time" is even stronger than it was before.  But, it's coming from a pure place.  We are all meant to grow and expand beyond where we are now.  And that is exactly what I plan to do when I train for my next marathon...and the next...and the next.

Thanks a bunch, Chicago.  It was a real pleasure.  Next time, I'll be sure to try your famous pizza.

Posted by Cyndi Springford at 1:19 PM