"Chicago, Chicago--I will show you around. I love it.  Bet your bottom dollar you'll lose the blues in Chicago, Chicago.  The town that Billy Sunday couldn't shut down." -- Sung by the legendary Frank Sinatra

I met Ted at Logan International Airport on Friday and we boarded a plane headed to Chi Town.  We were both running the "We'll charge you $5" Bank of America Chicago Marathon on Sunday, 10/9/11 (I just had to throw that in.  What do I care anyway...I'm with TD Bank).  Our third musketeer, John, didn't make the trip with us this time around due to an unwilling hamstring, but we brought him with us in mind and spirit, particularly since he was the first one of us to register for this race in the first place.

Thankfully, our flight was on time and went off without a hitch.  We arrived at O'Hare and took the CTA Train to downtown, where our hotel, the Hyatt Regency, was.  Once we checked in, we dropped off our bags and took a taxi to the expo.  Turns out, Friday was the day to go.  There was a good amount of people there, but the place was large enough to accommodate and there weren't any lines for number pickup.  After some light shopping, we took the bus back to downtown.  It was at this time we realized we had practically taken every mode of transportation known to man in one day (auto, plane, train, taxi and bus).  All we needed was to find a boat and our day would have been complete.

Thanks to some kickass room darkening drapes, we enjoyed sleeping until 7:30 a.m. on Saturday.  It could have been even later had the phone not rung.  Neither one of us were in a hurry to get up and go, but after receiving two visits from housekeeping in the span of an hour, we figured it was probably a good idea.  We got ourselves a light breakfast and went to scope out a place to meet post race.  This seemed like the logical choice: 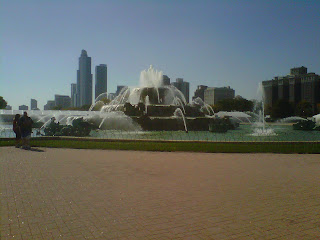 Look familiar?  Anyone that has ever watched "Married With Children" has seen this as it appears in the opening of every show.  It's Buckingham Fountain in Grant Park.  Impressive, eh?  I took a picture of it with my CrackBerry (which came out pretty good, if I do say so myself).  We picked a spot near some trees by the fountain cafe.  Having ironed out this important detail, we headed over to The Art Institute of Chicago.  I'm ignorant when it comes to art.  Now, I'm not putting myself down, I'm using the word "ignorant" in it's proper sense:  uninformed.  Ted has an affinity for the artsy fartsy stuff, so I followed his lead.  I won't bore you with the details, but I will provide you with their website.  Perhaps you're artsy fartsy too:

We had some tasty Asian cuisine for lunch (egg drop soup for Ted, hot and sour soup for me and Sesame Chicken we both shared) and hopped on the train to visit Ted's friend, Chuck, who lived just outside of Chicago in Oak Park.  He picked us up and drove us around so we can check out buildings and houses designed by Frank Lloyd Wright, a famous architect, of whom I had no prior knowledge.  The only architect I had ever heard of was Mike Brady (yes, I know it's a fictional character, but I come from a divorced family and television was my babysitter).

Chuck was kind enough to take us back to his home so we could socialize a bit.  His wife, Wanda, was super nice and made us fresh brewed iced tea complete w/lemon wedge.  We enjoyed conversing with them for an hour or so and would have made a night of it, had we not had a date with 26.2 miles of asphalt in 13 hours.  So, we said our goodbyes and headed back on the train in search of dinner.  We ended up going to this place:

They had outdoor seating which was cool...except you had to scream your face off everytime the trains went by.  But hey, what do you want?  It's the city, for crying out loud.  We limited ourselves to one beer each since we needed to be hydrated as opposed to hungover the next day.  Once we were finished, we headed to the store nearest the hotel to get runner friendly pre-marathon food.  It was hilarious going in there and seeing all of these lean, athletic types walking around with a bagel in one hand and a banana in another.  That is akin to a secret handshake for marathon runners.  I bet that store never sells that many of either item any other day of the year.

Once we got back to the hotel, we thought it best to get all of our race gear ready for the morning.  I covered all the bases: 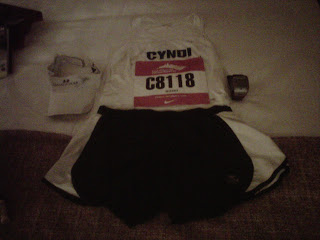 For this race, I opted to rock my 2008 Lazarus House Team Hunger Striker Singlet.  It was light, it was white, and it had my name on it.  From what I heard, the crowds in Chicago are AMAZING.  I'll shamelessly lap up all of the encouragement and "Go Cyndi's" I can get on a run that long.  I also put the D-Tag (timing chip) on my shoe so I wouldn't have to screw around with that at 6 a.m.

With all the pre-race prep done, all that remained was to relax, unwind and wait for sleep to come.

Tomorrow was going to be a big day.


Posted by Cyndi Springford at 6:26 PM