On this day in history, quite a few things happened. 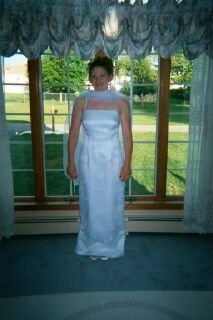 I clean up pretty good, don't I?

One of my closest and dearest friends, Michelle, stood up with us (we're in her living room): 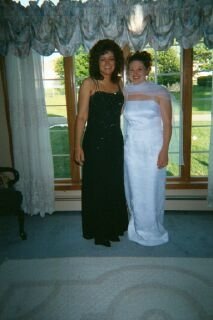 And her two kids (Tanya on my left, wearing a pair of my shoes, and Jackie on my right) are just too cute not to be photographed: 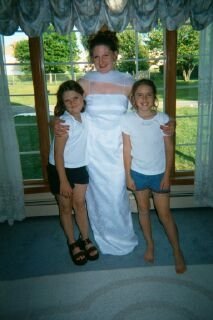 Of course now, Tanya is a senior in high school and Jackie just finished her freshman year in college.  They both tower over me now.  And I'm pretty sure Tanya wouldn't fit into my shoes anymore.

It was a good day.

I met my husband in 1995.  We had a very long courtship, dating three years before becoming engaged and then living as fiance and fiancee for another three.  Witnessing the divorce of my parents, I was never quite sure how I felt about marriage.  I didn't know if it would be something I'd ever do.  But, after putting my husband-to-be off for months and months, I knew I had to either put up or shut up.

I think I'm a pretty good catch, but he's not going to wait around forever, nor should he.

So, we decided to have a simple ceremony on a Friday evening at the Pondview in Kingston with only three couples and the justice of the peace.  It was very informal.  Basically, we eloped.  Two days later, we hosted a Memorial Day weekend party at our place with friends and family.  At this time, we "broke the news" that we had tied the knot.  Our guests were completely shocked, but in a good way.  It was a fun way to begin life as a married couple.

So, what's marriage like?  Well, I can tell you first hand that the whole is only as good as the sum of its parts.  Both my husband and I have done lots of maturing, learning and growing, together and separately.  We're definitely not the same people that we were when we met over 16 years ago.

And for that, I'm so thankful.

I was only 23 years old when I was introduced to him.  I was still "under construction" and had lots of things yet to learn about life and my place in it.  And yes, I dragged my feet, finally consenting to exchanging vows over six years later, but I'm so happy we waited.  Lots of people marry young and then end up going their separate ways.  My husband was an usher in two weddings back in 1996.  Both marriages have since ended.

Looking back over the past 10 years, I can honestly say that it keeps getting better and better.  We communicate much better than we ever have before.  As we grow and change (I picked up marathoning and he picked up golf), we support each other in our respective endeavors and interests, even if they are not shared.  We have learned the importance of being whole and healthy individuals, knowing that it only makes our union stronger.  The longer we have to love each other, the more we are able to understand and accept one another.  That doesn't mean we won't disagree, but we can deal with that.  We know it'll all work out.  And we trust that the other person won't give up, even when it's not all hearts and flowers.

Happy Anniversary to my husband, Michael.  Thank you for being such a great partner, person and friend.  Here's to another ten years. 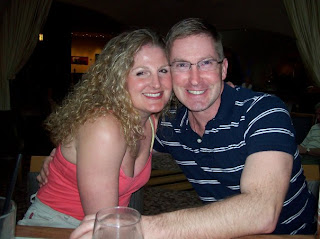 Posted by Cyndi Springford at 10:06 AM