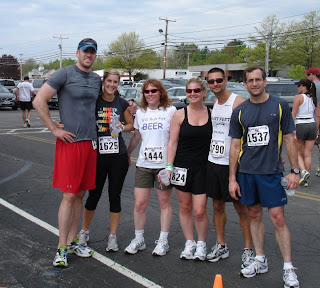 My fifth and final "Will Run For Beer" race. There was just one more 5K standing between me and that jacket.

Let me just say those LOCO Running folks sure know how to throw a party (and no, they didn't pay me to say that). This race was called the "Cinco de Mayo" 5K at Margaritas in Exeter, NH. So, not only are you running for beer, but you get to have tequila too.

At this point, I was less than 30 days away from the "big show": the Vermont City Marathon on 5/30. I did that sick track workout, followed by a day of rest and a 16 mile run outside. I didn't tell Coach about this race, because, well, I just didn't want to. He had mentioned to me before we needed to be careful that the races didn't interfere with the long run. But, since I did the long run the day BEFORE the race, I figured I could bend the rules.

Besides, I was just planning on running this for fun. I know, I know. I'm not very good at that. I say I'll enter a race and not focus on time or the competition, but I always seem to. However, I had that huge breakthrough after my experience with the Great Bay Half Marathon, so this seemed like a good time to put the new me to the test.

My friend, Sarah, and her boyfriend, Tom, decided to do the race too, so we decided to meet up and head over to the race together. After taking a couple of wrong turns (we got a little lost and this time I wasn't driving), we made it to our destination. There were a ton of people there already so we had to take a parking spot across the street. We all had to register for the race since none of us planned ahead (sometimes it's okay to wing it). We didn't get a shirt, but they were passing out these crazy looking sombreros to all of the runners. I almost decided to wear it while I ran, but changed my mind.

Running a race for fun is one thing. Looking like an escaped mental patient is another matter entirely.

Sarah and I went off for a little warm-up jog while Tom opted to warm-up at the gun. We went out for 10-15 minutes, just to warm up the legs. After visiting the portables, we were ready to line up. She and I were going to run together since neither one of us really had a time goal.

Runners take your mark, get set, and go.

The gun goes off and we start to run. Well, more like "shuffle"; the first tenth of a mile is always pretty crowded until you get a little separation. The first mile went by pretty quickly. Somewhere between miles 1 and 2, she and I got separated. I decided to gradually pick up the pace as I ran. I had started off pretty conservatively and felt pretty good, considering I ran 16 miles the day before. I just chipped away at it until mile 2. Then, I figured I could bust out for the last 1.1. There was a decent amount of downhill on that course, so it was pretty easy to negative split.

Negative split = running the 2nd half of a run/race faster than the 1st half.

Now, back to our story.

I crossed the finish line in 24:38, averaging a 7:57 pace. It wasn't my slowest 5K time ever and it certainly wasn't a PR. But, I was good with that. I waited for the regret, disappointment, etc. and it never came. I said I'd run a race for fun and I did. I had a good workout and saw lots of people that I knew. My friend, Jimmie, was there again with his friend, Ken (those where the dudes I hung out with at the April Fools 4 Miler). So, of course, we had to go off and do our requisite 2 mile cool-down. It was tradition, after all.

After our two mile jog was complete, I found Sarah and Tom. We were surveying the food line and debated whether or not to get in it. They were serving Mexican food to all the runners. Those old enough could go inside for a complimentary margarita as well. We were so undecided, we ended up leaving. Instead of beans, rice and tequila, we opted for mai tais and sushi.

What can I say? We march to the beat of our own drummer.

All in all, it was a good day. I had a good run with friends. And I got a free sombrero to boot. I don't have a picture of it, but you can look at my friends and me after the run.