Break It On Down, Y'All 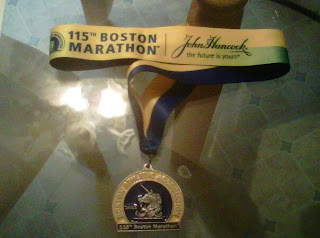 This was my 7th marathon and my 3rd Boston.

First, let me say that, yes, I am glad and proud of myself that I finished.  It was tough going there for me, particularly in the last 10 miles.  I had to talk myself into not quitting.  More than once.  I alternated short bursts of walking with longer stretches of running, just staying focused on forward movement.

As you may remember from my previous entries, I am not a "detail" person.  You aren't going to get a "play by play" recap of my run yesterday.  Plus, anyone that is anyone knows how to check my stats online.  Simply stated, I started off strong and ended up running a positive split, which means the second half of my marathon was slower than the first half.  It's always tempting to look back at what didn't quite go the way you planned and say, "maybe I should have done this" or "perhaps I should have tried that."

Well, friends, those are just thoughts.  And it would be both unwise and counterproductive to latch on to them.

You see, the race played out exactly as it should have.  I took a chance and went after a personal best for Boston (which still stands at 3:55).  I was able to hold a sub 3:50 pace until the 30K mark.  From that point on, as I began to tire, it became more about just finishing and less about achieving a fast time.

So, I will have no regrets.  I do have a couple of observations that I can carry in to my next training cycle:

1)  Although I live in NH which has hills, I did no specific "hill repeats" or "hill training" in prep for Boston.  The hills on that particular course are between miles 16 and 21.  This may or may not have contributed to my fatigue.

3)  I'm not sure how all the low heart rate training factored into the way I ran yesterday.  In some ways, it may have been beneficial.  In others, I'm not sure it prepared me to run marathon pace as well as previous training methods.

4)  Not a cop out, just an observation:  it was 60 degrees and full sun yesterday for the first 21 miles.  I think I'm not alone in saying that we had a crazy long, cold, windy, snowy winter.  Lots of my friends ran slower times than they were planning.  Unless you are from Kenya, or the southern US, you weren't sufficiently acclimated to running long distance in this temperature.  Perhaps this had something to do with it.

So, that's my version of the marathon autopsy.  It would have been great to have run a faster time.  But, at least I tried from the very beginning.  And I held it for the first 18.6 miles.  I've never been able to do that before on that course.  So, it's high time I celebrate what went right instead of what could have been done differently.

To ALL that ran the Boston Marathon yesterday, you have my undying respect.  Congratulations, in particular, to those of you who ran your very first 26.2 race yesterday.