Touched By a Patriot: The 2011 Community MVP Luncheon at Gillette Stadium in Foxborough, MA

Remember when I told you that running for a charity totally rocks?

Well, let me refresh your memory.

Because I was a member of the NE Patriots Charitable Foundation Boston Marathon Team, I received an invite for myself and a guest to attend the 2011 Community MVP Luncheon at Gillette Stadium in Foxborough, MA, home of the three-time Superbowl Champion New England Patriots (like I even needed to say that).  The luncheon also included a tribute to the outstanding contribution of the Foundation's Community MVP Winners.  Grand prize, Runners-Up and Finalist placements would be announced after lunch.

All of this sounds pretty good, right?

Well, let me tell you, good doesn't even begin to cover it.

I invited my friend, Kate, to come along with me.  She and I have known each other since the third grade, which is pretty awesome.  Not only did she have her fair share of "seniority", but Kate also happens to be one of the biggest female sports fans I know.  Plus, she is a Patriots season ticket holder and I figured she would get a huge kick out of going.

We arrived a few minutes past noon and immediately found one of my marathon teammates, Joe, who came with his girlfriend, Jessica.  After exchanging pleasantries, we headed on up to the North East Lounge and found a table.  I'm not sure which was better, the menu (spinach salad, stuffed chicken breast with rice and asparagus and chocolate lava cake with fresh whipped cream and berries) or the conversation.  We sat with one of the runners-up for the MVP award, who does some work for Marguerite's Place in Nashua, NH, and his guests.  To spend time with people who give their heart and soul to help those less fortunate is such a positive and uplifting experience.  It was also great to chat with a couple of my teammates to find out how their post-marathon recovery went.

Once everyone finished lunch, we made our way on the other side of the function room to see the awards presentation.  As Joshua Kraft, son of Patriots owner, Robert Kraft, introduced each individual that was being recognized, my friend, Kate, actually got a little teary eyed (or maybe because she was in the presence of such football greatness).  In all seriousness, it did kind of make you go "awwwww" and put a big smile on your face.  There can never be enough reminders of how much goodness there is in the world.

After the closing remarks and applause, we got up and started walking out, thinking we were going to leave.  But, we had a couple of surprises waiting for us.  First, Patriots Kicker, Stephen Gostkowski, was autographing Patriots Pennants for everyone.  Secondly, the marathon team got introduced to Stephen AND Mr. Robert Kraft himself.

Don't believe me?  I have the pictures to prove it: 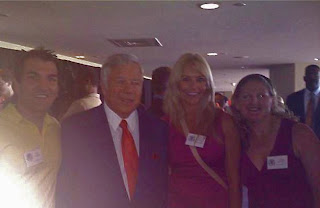 Pardon the flashiness in the corner.  From left to right:  Joe Sobalo, Mr. Robert Kraft, Susan Hurley and me. 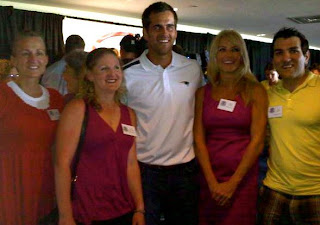 From left to right:  Carol Crutchfield, me, Stephen Gostkowski, Susan Hurley and Joe Sobalo.
I can now go to my grave saying I was touched by a Patriots player.  Sigh....﻿
But wait!  There's more.
All of the guests of the luncheon were allowed to walk down to the football field.  The field!  Where the Patriots play!  The real frickin' field!!! 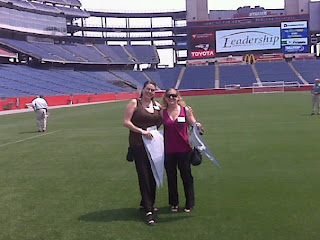 Here I am with my excellent date, Kate.  Look at how green it is. 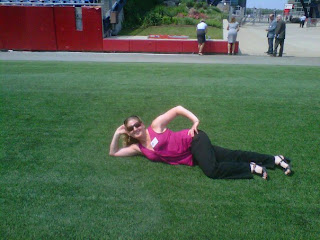 I never could resist a good photo op.

Finally, we gathered our belongings, said our goodbyes, and got in the red car to head back north.  It was such an amazing experience and I'm still flying high from it.  Thanks so much to the New England Patriots Charitable Foundation for giving me one of the best days of my life. 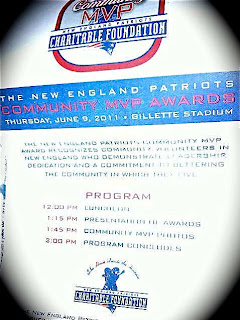 Now, if they can just get that pesky owner/player deal worked out...